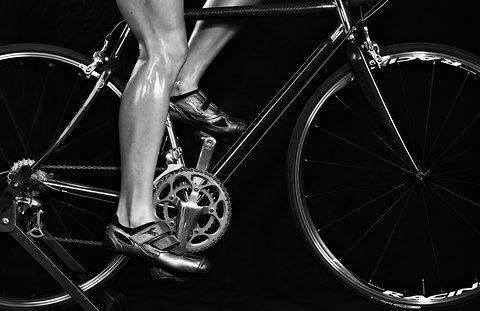 While many of us wonder just how much exercise we really need in order to gain health and fitness, a group of scientists in Canada are turning that issue on its head and asking, how little exercise do we need?

The emerging and engaging answer appears to be, a lot less than most of us think — provided we’re willing to work a bit.

In proof of that idea, researchers at McMaster University in Hamilton, Ontario, recently gathered several groups of volunteers. One consisted of sedentary but generally healthy middle-aged men and women. Another was composed of middle-aged and older patients who’d been diagnosed with cardiovascular disease.

The researchers tested each volunteer’s maximum heart rate and peak power output on a stationary bicycle. In both groups, the peaks were not, frankly, very high; all of the volunteers were out of shape and, in the case of the cardiac patients, unwell. But they gamely agreed to undertake a newly devised program of cycling intervals.

Most of us have heard of intervals, or repeated, short, sharp bursts of strenuous activity, interspersed with rest periods. Almost all competitive athletes strategically employ a session or two of interval training every week to improve their speed and endurance.

But the Canadian researchers were not asking their volunteers to sprinkle a few interval sessions into exercise routines. Instead, the researchers wanted the groups to exercise exclusively with intervals.

For years, the American Heart Association and other organizations have recommended that people complete 30 minutes or more of continuous, moderate-intensity exercise, such as a brisk walk, five times a week, for overall good health.

But millions of Americans don’t engage in that much moderate exercise, if they complete any at all. Asked why, a majority of respondents, in survey after survey, say, “I don’t have time.”

Intervals, however, require little time. They are, by definition, short. But whether most people can tolerate intervals, and whether, in turn, intervals provide the same health and fitness benefits as longer, more moderate endurance exercise are issues that haven’t been much investigated.

Several years ago, the McMasters scientists did test a punishing workout, known as high-intensity interval training, or HIIT, that involved 30 seconds of all-out effort at 100 percent of a person’s maximum heart rate. After six weeks, these lacerating HIIT sessions produced similar physiological changes in the leg muscles of young men as multiple, hour-long sessions per week of steady cycling, even though the HIIT workouts involved about 90 percent less exercise time.

Recognizing, however, that few of us willingly can or will practice such straining all-out effort, the researchers also developed a gentler but still chronologically abbreviated form of HIIT. This modified routine involved one minute of strenuous effort, at about 90 percent of a person’s maximum heart rate (which most of us can estimate, very roughly, by subtracting our age from 220), followed by one minute of easy recovery. The effort and recovery are repeated 10 times, for a total of 20 minutes.

Despite the small time commitment of this modified HIIT program, after several weeks of practicing it, both the unfit volunteers and the cardiac patients showed significant improvements in their health and fitness.

The results, published in a recent review of HIIT-related research, were especially remarkable in the cardiac patients. They showed “significant improvements” in the functioning of their blood vessels and heart, said Maureen MacDonald, an associate professor of kinesiology at McMaster who is leading the ongoing experiment.

It might seem counterintuitive that strenuous exercise would be productive or even wise for cardiac patients. But so far none have experienced heart problems related to the workouts, Dr. MacDonald said. “It appears that the heart is insulated from the intensity” of the intervals, she said, “because the effort is so brief.”

Almost as surprising, the cardiac patients have embraced the routine. Although their ratings of perceived exertion, or sense of the discomfort of each individual interval, are high and probably accurate, averaging a 7 or higher on a 10-point scale, they report enjoying the entire sessions more than longer, continuous moderate exercise, Dr. MacDonald said.

“The hard work is short,” she points out, “so it’s tolerable.” Members of a separate, exercise control group at the rehab center, assigned to complete standard 30-minute moderate-intensity workout sessions, have been watching wistfully as the interval trainers leave the lab before them. “They want to switch groups,” she said.

The scientists have noted other benefits in earlier studies. In unfit but otherwise healthy middle-aged adults, two weeks of modified HIIT training prompted the creation of far more cellular proteins involved in energy production and oxygen. The training also improved the volunteers’ insulin sensitivity and blood sugar regulation, lowering their risk of developing Type 2 diabetes, according to a study published last fall in Medicine & Science in Sports & Exercise.

Since then, the scientists completed a small, follow-up experimentinvolving people with full-blown Type 2 diabetes. They found that even a single bout of the 1-minute hard, 1-minute easy HIIT training, repeated 10 times, improved blood sugar regulation throughout the following day, particularly after meals.

Of course, HIIT training is not ideal or necessary for everyone, said Martin Gibala, a professor of kinesiology at McMaster, who’s overseen the high-intensity studies. “If you have time” for regular 30-minute or longer endurance exercise training, “then by all means, keep it up,” he said. “There’s an impressive body of science showing” that such workouts “are very effective at improving health and fitness.”

But if time constraints keep you from lengthier exercise, he continues, consult your doctor for clearance, and then consider rapidly pedaling a stationary bicycle or sprinting uphill for one minute, aiming to raise your heart rate to about 90 percent of your maximum. Pedal or jog easily downhill for a minute and repeat nine times, perhaps twice a week. “It’s very potent exercise,” Dr. Gibala said. “And then, very quickly, it’s done.”